Presenter Search on 3 is back and this year the search is on for two new presenters to join the feel good breakfast show family on Expresso Show.


Hosted by the Expresso Show’s female powerhouse, Leigh-Anne Williams, viewers go on a journey through the years of this popular show that’s produced some of the country’s best television presenters. The show has not only changed lives, but has driven South Africans to pursue the best version of themselves.


In the first episode, previous Presenter Search on 3 winners share their personal experiences and hand out some useful advice for this year’s contestants. Top Billing’s Jonathan Boynton-Lee recaps his emotions, the excitement and the challenges he faced during his audition phase. He also shares some insight and advice about the journey after winning the 2012 edition.

Viewers will remember the special bond forged between Jonathan and Simba Mhere, who won Presenter Search on 3 in 2010. Top Billing’s executive producer Basetsana Kumalo describes the impact of Simba on the show as someone who carried the dream of so many young South Africans.

2018 was a groundbreaking edition when not one, but three new presenters were selected for Top Billing. Harmony Katulondi reveals that it was his fourth time entering for the competition, and he’s got nothing but gratitude for the opportunity and the lessons he’s learnt along the way.

Ryle De Morny points out the relationships that grew from the competition that he holds close to his heart, while Doctor Fezile Mkhize explains how this journey has shaped his life and calls on all the contestants to stay true to themselves.

Executive producer Patience Stevens highlights the incredible achievements of the winners since they embarked on this new career and that Presenter Search on 3 is the key to unlock the door for anyone.

The past few years also saw the likes of Danilo Acquisto, Palesa Tembe and Zoë Brown who found a place in millions of South African homes with shows like Afternoon Express and Expresso Show.

We go behind-the-scenes on the Expresso set to get a real taste of studio life. The show’s presenters Katlego Maboe, Graeme Richards and Thabiso Makhubela explain what a day on set is like, from the guests they meet to the topics they cover.

The question is: What makes a great presenter? We meet the judges for this year’s competition who will ultimate decide who gets to greet the country on weekdays at 6AM. It’s all up to Dr Musa Mthombeni, Thando Thabethe and Roger Goode and we find out what they're looking for in this years competition. 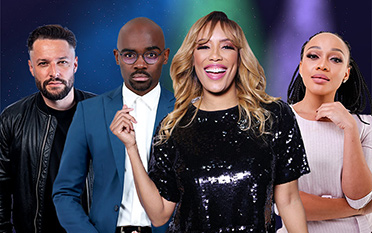