For the final leg of auditions, we had the gargantuan task of not one, not two, but three days of auditions at Wanderer’s Cricket Stadium in Illovo, Johannesburg. Hopefuls came from all over South Africa for their chance to audition with many flying in from other provinces. Guest judges over the three days were: Top Billing presenters Lorna Maseko, Jade Hubner (who was one of the last season’s winners) and heartthrob Jonathan Boynton-Lee, Mela’s Zakeeya Patel, SABC3 Programme Manager Hamilton Ngubo, Metro FM’s Lerato Kganyago, Afternoon Express presenter Bonnie Mbuli, Expresso presenter Leigh-Anne Williams and 5FM DJ Nick Hamman.

Jozi brought out the real talent, featuring a contestant who holds the world record for most consecutive back-handsprings, a male fitness model with his sites on presenting to a professional ballet dancer! Who will make it through to our main judges? You’ll have to wait until episode five to find out! 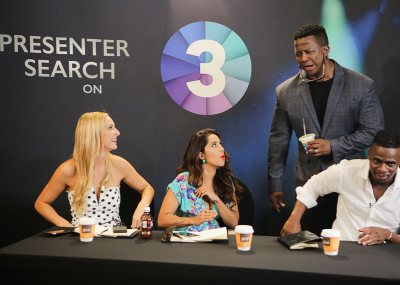